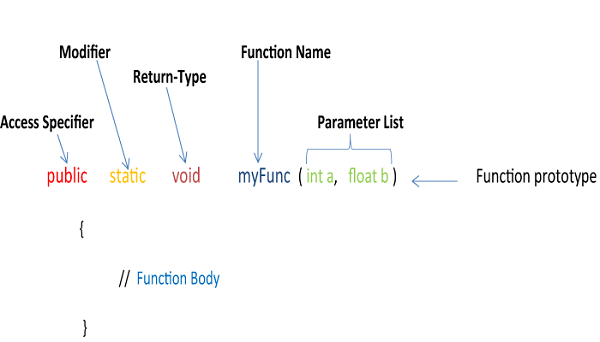 A function is named unit of program codes that can be called from anywhere in the class. The primary purpose of using functions is to save ourselves from duplicating our code.

Anatomy of a Function

The figure above explains the anatomy of a function

public is the access specifier i.e. the scope of availability of this function.

The modifier static is optional and its presence in function declaration means that the function can be called without making an object of its class.

void is the return type and it means that the function does not return any value. If a function is to return a value then void should be replaced with the data type of the returned value.

myFunc is the function name by which the function is identified. It can be any valid identifier in java. If you follow the convention, which you must, then you should begin the name of the function with a lowercase letter.

Function prototype – It is the first line of a function definition that informs the compiler about the number and type of arguments it will receive and the type of value it will return.

Return statement is used in a function to transfer back the control or to return a value to the calling part (function).

Function signature – It is a part of the function prototype and refers to the number and type of arguments a function receives.

function body is the place where the program code is placed.

Types of functions in Java

Call by Value (Pass by Value)

The function which does not modify the state of the object/data received as parameters is known as a pure function.

The function which modifies the state of the object/data received as parameters is known as an impure function.