John Pierpont Morgan (April 17, 1837 – March 31, 1913) was an American financier, banker, philanthropist and art collector who dominated corporate finance and industrial consolidation during his time. In 1892 Morgan arranged the merger of Edison General Electric and Thomson-Houston Electric Company to form General Electric. After financing the creation of the Federal Steel Company he merged in 1901 with the Carnegie Steel Company and several other steel and iron businesses, including Consolidated Steel and Wire Company owned by William Edenborn, to form the United States Steel Corporation. 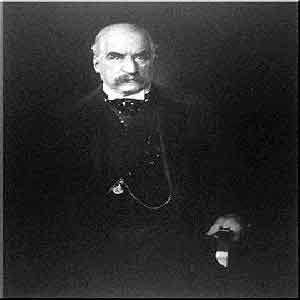 Morgan died in Rome, Italy, in his sleep in 1913 at the age of 75, leaving his fortune and business to his son, John Pierpont "Jack" Morgan, Jr., and bequeathing his mansion and large book collections to The Morgan Library & Museum in New York.

At the height of Morgan's career during the early 1900s, he and his partners had financial investments in many large corporations and were accused by critics of controlling the nation's high finance. He directed the banking coalition that stopped the Panic of 1907. He was the leading financier of the Progressive Era, and his dedication to efficiency and modernization helped transform American business. Morgan redefined conservatism in terms of financial prowess coupled with strong commitments to religion and high culture.

J. P. Morgan was born and raised in Hartford, Connecticut. Pierpont, as he preferred to be known, had a varied education due in part to interference by his father, Junius. In the fall of 1848, Pierpont transferred to the Hartford Public School and then to the Episcopal Academy in Cheshire, Connecticut, (now called Cheshire Academy), boarding with the principal. In September 1851, Morgan passed the entrance exam for the English High School of Boston, a school specializing in mathematics to prepare young men for careers in commerce.

After graduating, his father sent him to Bellerive, a school near the Swiss village of Vevey. When Morgan had attained fluency in French, his father sent him to the University of Göttingen in order to improve his German. Attaining a passable level of German within six months and also a degree in art history, Morgan traveled back to London via Wiesbaden, with his education complete.

Morgan went into banking in 1857 at his father's London branch, moving to New York City in 1858 where he worked at the banking house of Duncan, Sherman & Company, the American representatives of George Peabody & Company. From 1860 to 1864, as J. Pierpont Morgan & Company, he acted as agent in New York for his father's firm.

In the early days of the American Civil War Morgan financed a scheme, known as the "Hall Carbine Affair", that purchased 5,000 dangerously defective Hall's Carbines being liquidated by the U.S. Government at a cost of $3.50 each. The rifles were later resold to the government as new carbines lacking the safety flaw at a cost of $22. The audacity of the scheme included not only the $92,426 loss by the government and the selling of weapons known to maim their operators to an army in need of firearms, but the guns were also sold prior to ownership, thus the guns were paid for with money from their sale back to the government.

After the 1893 death of Anthony Drexel, the firm was rechristened "J. P. Morgan & Company" in 1895. By 1900, it was one of the most powerful banking houses of the world, carrying through many deals especially reorganizations and consolidations. Morgan had many partners over the years, such as George W. Perkins, but remained firmly in charge.

Morgan's ascent to power was accompanied by dynamic financial battles. He wrested control of the Albany and Susquehanna Railroad from Jay Gould and Jim Fisk in 1869. He led the syndicate that broke the government-financing privileges of Jay Cooke, and soon became deeply involved in developing and financing a railroad empire by reorganizations and consolidations in all parts of the United States.

He raised large sums in Europe, but instead of only handling the funds, he helped the railroads reorganize and achieve greater efficiencies. In 1885, he reorganized the New York, West Shore & Buffalo Railroad, leasing it to the New York Central. In 1886, he reorganized the Philadelphia & Reading, and in 1888 the Chesapeake & Ohio. He was heavily involved with railroad tycoon James J. Hill and the Great Northern Railway.

After Congress passed the Interstate Commerce Act in 1887, Morgan set up conferences in 1889 and 1890 that brought together railroad presidents in order to help the industry follow the new laws and write agreements for the maintenance of "public, reasonable, uniform and stable rates." The conferences were the first of their kind, and by creating a community of interest among competing lines paved the way for the great consolidations of the early 20th century.

Morgan's process of taking over troubled businesses to reorganize them was known as "Morganization". Morgan reorganized business structures and management in order to return them to profitability. His reputation as a banker and financier also helped bring interest from investors to the businesses he took over.

In 1896, Adolph Simon Ochs, who owned the Chattanooga Times, secured financing from Morgan to purchase the financially struggling New York Times. It became the standard for American journalism by cutting prices, investing in news gathering, and insisting on the highest quality of writing and reporting.

In 1895, at the depths of the Panic of 1893, the Federal Treasury was nearly out of gold. President Grover Cleveland accepted Morgan's offer to join with the Rothschilds and supply the U.S. Treasury with 3.5 million ounces of gold to restore the treasury surplus in exchange for a 30-year bond issue. The episode saved the Treasury but hurt Cleveland with the agrarian wing of the Democratic Party and became an issue in the election of 1896, when banks came under a withering attack from William Jennings Bryan. Morgan and Wall Street bankers donated heavily to Republican William McKinley, who was elected in 1896 and reelected in 1900. 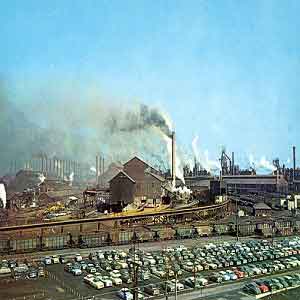 After the death of his father in 1890, Morgan took control of J. S. Morgan & Co. which was renamed Morgan, Grenfell & Company in 1910. Morgan began talks with Charles M. Schwab, president of Carnegie Co., and businessman Andrew Carnegie in 1900. The goal was to buy out Carnegie's steel business and merge it with several other steel, coal, mining and shipping firms to create the United States Steel Corporation. His goal was almost completed in late 1900 while negotiating a deal with Robert D. Tobin and Theodore Price III, but was then retracted immediately. In 1901 U.S. Steel was as the first billion-dollar company in the world with an authorized capitalization of $1.4 billion—much larger than any other industrial firm, and comparable in size to the largest railroads.

U.S. Steel aimed to achieve greater economies of scale, reduce transportation and resource costs, expand product lines, and improve distribution. It was also planned to allow the United States to compete globally with Britain and Germany. U.S. Steel's size was claimed by Charles M. Schwab and others to allow the company to pursue distant international markets-globalization. U.S. Steel was regarded as a monopoly by critics, as the business was attempting to dominate not only steel but also the construction of bridges, ships, railroad cars and rails, wire, nails, and a host of other products. With U.S. Steel, Morgan had captured two-thirds of the steel market, and Schwab was confident that the company would soon hold a 75 percent market share. However, after 1901 the businesses' market share dropped. Schwab resigned from U.S. Steel in 1903 to form Bethlehem Steel, which became the second largest U.S. producer on the strength of such innovations as the wide flange "H" beam—precursor to the I-beam—widely used in construction.

The Rescue Of American Economy

The Panic of 1907 was a financial crisis that almost crippled the American economy. Major New York banks were on the verge of bankruptcy and there was no mechanism to rescue them until Morgan stepped in personally and took charge, resolving the crisis. Treasury Secretary George B. Cortelyou earmarked $35 million of federal money to quell the storm but had no easy way to use it. Morgan now took personal charge, meeting with the nation's leading financiers in his New York mansion; he forced them to devise a plan to meet the crisis. James Stillman, president of the National City Bank, also played a central role. Morgan organized a team of bank and trust executives which redirected money between banks, secured further international lines of credit, and bought plummeting stocks of healthy corporations. A delicate political issue arose regarding the brokerage firm of Moore and Schley, which was deeply involved in a speculative pool in the stock of the Tennessee Coal, Iron and Railroad Company. Moore and Schley had pledged over $6 million of the Tennessee Coal and Iron (TCI) stock for loans among the Wall Street banks. The banks had called the loans, and the firm could not pay. If Moore and Schley should fail, a hundred more failures would follow and then all Wall Street might go to pieces. Morgan decided they had to save Moore and Schley. TCI was one of the chief competitors of U.S. Steel and it owned valuable iron and coal deposits. Morgan controlled U.S. Steel and he decided it had to buy the TCI stock from Moore and Schley. Judge Gary, head of U.S. Steel, agreed, but was concerned there would be antitrust implications that could cause grave trouble for U.S. Steel, which was already dominant in the steel industry. Morgan sent Gary to see President Theodore Roosevelt, who promised legal immunity for the deal. U.S. Steel thereupon paid $30 million for the TCI stock and Moore and Schley was saved. The announcement had an immediate effect; by November 7, 1907, the panic was over. Vowing to never let it happen again, and realizing that in a future crisis there was not likely to be another Morgan, banking and political leaders, led by Senator Nelson Aldrich devised a plan that became the Federal Reserve System in 1913. The crisis underscored the need for a powerful mechanism, and Morgan supported the move to create the Federal Reserve System.

While conservatives in the Progressive Era hailed Morgan for his civic responsibility, his strengthening of the national economy, and his devotion to the arts and religion, the left wing felt threatened by his enormous economic power. Morgan's role in the economy was denounced as overpowering in this hostile political cartoon Labor policy was a contentious issue.

Enemies of banking attacked Morgan for the terms of his loan of gold to the federal government in the 1895 crisis, for his financial resolution of the Panic of 1907, and for bringing on the financial ills of the New York, New Haven and Hartford Railroad.