The man behind Windows

William Henry "Bill" Gates III (born October 28, 1955) is an American business magnate, computer programmer and philanthropist. Gates is the former chief executive and current chairman of Microsoft, the world’s largest personal-computer software company, which he co-founded with Paul Allen. He is consistently ranked among the world's wealthiest people and was the wealthiest overall from 1995 to 2009, excluding 2008, when he was ranked third; in 2011 he was the wealthiest American and the second wealthiest person. During his career at Microsoft, Gates held the positions of CEO and chief software architect, and remains the largest individual shareholder, with 6.4 percent of the common stock. He has also authored or co-authored several books.

Gates is one of the best-known entrepreneurs of the personal computer revolution. Gates has been criticized for his business tactics, which have been considered anti-competitive, an opinion which has in some cases been upheld by the courts. In the later stages of his career, Gates has pursued a number of philanthropic endeavors, donating large amounts of money to various charitable organizations and scientific research programs through the Bill & Melinda Gates Foundation, established in 2000. 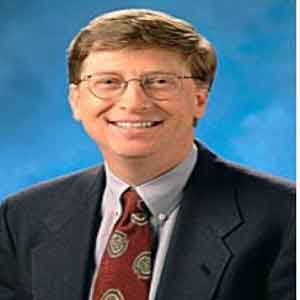 Gates stepped down as chief executive officer of Microsoft in January 2000. He remained as chairman and created the position of chief software architect. In June 2006, Gates announced that he would be transitioning from full-time work at Microsoft to part-time work, and full-time work at the Bill & Melinda Gates Foundation. He gradually transferred his duties to Ray Ozzie, chief software architect, and Craig Mundie, chief research and strategy officer. Gates's last full-time day at Microsoft was June 27, 2008. He remains at Microsoft as non-executive chairman.William (Bill) H. Gates is chairman of Microsoft Corporation, the worldwide leader in software, services and solutions that help people and businesses realize their full potential.

On June 27, 2008, Gates transitioned out of a day-to-day role in the company to spend more time on his global health and education work at the Bill & Melinda Gates Foundation. He shares his thoughts about the foundation and other topics on Gates Notes, a Web site launched in January 2010. Gates continues to serve as Microsoft's chairman and as an advisor on key development projects. In June 2006, Craig Mundie assumed the new title of chief research and strategy officer at Microsoft and is responsible for the company's research and incubation efforts.

Gates was born in Seattle, Washington, to William H. Gates, Sr. and Mary Maxwell Gates. His father was a prominent lawyer, and his mother served on the board of directors for First Interstate BancSystem and the United Way. Gates's maternal grandfather was J. W. Maxwell, a national bank president. Gates has one elder sister, Kristi (Kristianne), and one younger sister, Libby. Gates took interest in programming the GE system in BASIC, and was excused from math classes to pursue his interest. He wrote his first computer program on this machine: an implementation of tic-tac-toe that allowed users to play games against the computer. Gates was fascinated by the machine and how it would always execute software code perfectly. When he reflected back on that moment, he said, "There was just something neat about the machine." After the Mothers Club donation was exhausted, he and other students sought time on systems including DEC PDP minicomputers. One of these systems was a PDP-10 belonging to Computer Center Corporation (CCC), which banned four Lakeside students—Gates, Paul Allen, Ric Weiland, and Kent Evans—for the summer after it caught them exploiting bugs in the operating system to obtain free computer time.

At the end of the ban, the four students offered to find bugs in CCC's software in exchange for computer time. Rather than use the system via Teletype, Gates went to CCC's offices and studied source code for various programs that ran on the system, including programs in FORTRAN, LISP, and machine language. The arrangement with CCC continued until 1970, when the company went out of business. The following year, Information Sciences, Inc. hired the four Lakeside students to write a payroll program in COBOL, providing them computer time and royalties. After his administrators became aware of his programming abilities, Gates wrote the school's computer program to schedule students in classes. He modified the code so that he was placed in classes with mostly female students. He later stated that "it was hard to tear myself away from a machine at which I could so unambiguously demonstrate success." At age 17, Gates formed a venture with Allen, called Traf-O-Data, to make traffic counters based on the Intel 8008 processor.Gates graduated from Lakeside School in 1973. He scored 1590 out of 1600 on the SAT and enrolled at Harvard College in the autumn of 1973. While at Harvard, he met Steve Ballmer, who later succeeded Gates as CEO of Microsoft. 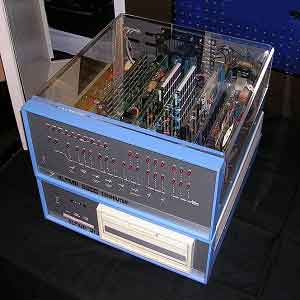 In his sophomore year, Gates devised an algorithm for pancake sorting as a solution to one of a series of unsolved problems presented in a combinatorics class by Harry Lewis, one of his professors. Gates's solution held the record as the fastest version for over thirty years. In the year 1975, the release of the MITS Altair 8800 based on the Intel 8080 CPU, made Gates and Allen see it as the opportunity to start their own computer software company.

The birth of Microsoft

After reading the January 1975 issue of Popular Electronics that demonstrated the Altair 8800, Gates contacted Micro Instrumentation and Telemetry Systems (MITS), the creators of the new microcomputer, to inform them that he and others were working on a BASIC interpreter for the platform. In reality, Gates and Allen did not have an Altair and had not written code for it; they merely wanted to gauge MITS's interest. MITS president Ed Roberts agreed to meet them for a demo, and over the course of a few weeks they developed an Altair emulator that ran on a minicomputer, and then the BASIC interpreter. The demonstration, held at MITS's offices in Albuquerque was a success and resulted in a deal with MITS to distribute the interpreter as Altair BASIC. Paul Allen was hired into MITS, and Gates took a leave of absence from Harvard to work with Allen at MITS in Albuquerque in November 1975. They named their partnership "Micro-Soft" and had their first office located in Albuquerque. Within a year, the hyphen was dropped, and on November 26, 1976, the trade name "Microsoft" was registered with the Office of the Secretary of the State of New Mexico. Gates never returned to Harvard to complete his studies.

Microsoft became independent of MITS in late 1976, and it continued to develop programming language software for various systems. The company moved from Albuquerque to its new home in Bellevue, Washington on January 1, 1979, after the former rejected his loan application.

During Microsoft's early years, all employees had broad responsibility for the company's business. Gates oversaw the business details, but continued to write code as well. In the first five years, Gates personally reviewed every line of code the company shipped, and often rewrote parts of it as he saw fit.

IBM approached Microsoft in July 1980 regarding its upcoming personal computer, the IBM PC. The computer company first proposed that Microsoft write the BASIC interpreter. When IBM's representatives mentioned that they needed an operating system, Gates referred them to Digital Research (DRI), makers of the widely used CP/M operating system. A few weeks later Gates proposed using 86-DOS (QDOS), an operating system similar to CP/M that Tim Paterson of Seattle Computer Products (SCP) had made for hardware similar to the PC. Microsoft made a deal with SCP to become the exclusive licensing agent, and later the full owner, of 86-DOS. After adapting the operating system for the PC, Microsoft delivered it to IBM as PC-DOS in exchange for a one-time fee of $50,000.

Gates did not offer to transfer the copyright on the operating system, because he believed that other hardware vendors would clone IBM's system. They did, and the sales of MS-DOS made Microsoft a major player in the industry. Despite IBM's name on the operating system the press quickly identified Microsoft as being very influential on the new computer, with PC Magazine asking if Gates were "The Man Behind The Machine?" He oversaw Microsoft's company restructuring on June 25, 1981, which re-incorporated the company in Washington state and made Gates President of Microsoft and the Chairman of the Board.

The opening of Windows 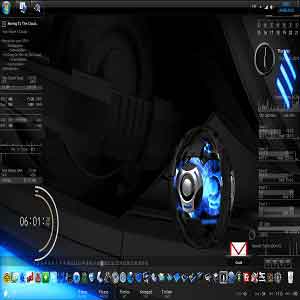 Microsoft launched its first retail version of Microsoft Windows on November 20, 1985, and in August, the company struck a deal with IBM to develop a separate operating system called OS/2. Although the two companies successfully developed the first version of the new system, mounting creative differences caused the partnership to deteriorate. It ended in 1991, when Gates led Microsoft to develop a version of OS/2 independently from IBM.

From Microsoft's founding in 1975 until 2006, Gates had primary responsibility for the company's product strategy. He aggressively broadened the company's range of products, and wherever Microsoft achieved a dominant position he vigorously defended it. He gained a reputation for being distant to others; as early as 1981 an industry executive complained in public that "Gates is notorious for not being reachable by phone and for not returning phone calls." 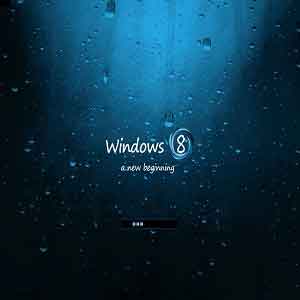 As an executive, Gates met regularly with Microsoft's senior managers and program managers. Firsthand accounts of these meetings describe him as verbally combative, berating managers for perceived holes in their business strategies or proposals that placed the company's long-term interests at risk. He often interrupted presentations with such comments as, "That's the stupidest thing I've ever heard!" and, "Why don't you just give up your options and join the Peace Corps?" The target of his outburst then had to defend the proposal in detail until, hopefully, Gates was fully convinced. When subordinates appeared to be procrastinating, he was known to remark sarcastically, "I'll do it over the weekend."

Gates's role at Microsoft for most of its history was primarily a management and executive role. However, he was an active software developer in the early years, particularly on the company's programming language products. He has not officially been on a development team since working on the TRS-80 Model 100, but wrote code as late as 1989 that shipped in the company's products. On June 15, 2006, Gates announced that he would transition out of his day-to-day role over the next two years to dedicate more time to philanthropy. He divided his responsibilities between two successors, placing Ray Ozzie in charge of day-to-day management and Craig Mundie in charge of long-term product strategy.

Other Interests and Philanthropy

In 1999, Gates wrote "Business @ the Speed of Thought", a book that shows how computer technology can solve business problems in fundamentally new ways. The book was published in 25 languages and is available in more than 60 countries. "Business @ the Speed of Thought" has received wide critical acclaim, and was listed on the best-seller lists of the "New York Times", "USA Today", "The Wall Street Journal" and on Amazon.com. Gates' previous book, "The Road Ahead", published in 1995, was at the top of the "New York Times" bestseller list for seven weeks. Gates has donated the proceeds of both books to non-profit organizations that support the use of technology in education and skills development.

In addition to his love of computers and software, Gates founded Corbis, which is developing one of the world's largest resources of visual information - a comprehensive digital archive of art and photography from public and private collections around the globe. He is also a member of the board of directors of Berkshire Hathaway Inc., which invests in companies engaged in diverse business activities.

Philanthropy is very important to Gates. He and his wife, Melinda, started a foundation in 2000 to help reduce inequities in the United States and around the world. The Bill & Melinda Gates Foundation supports philanthropic initiatives in the areas of global health and learning, with the hope that in the 21st century, advances in these critical areas will be available for all people. To learn more about the foundation, visit www.gatesfoundation.org