The Relationship Between Cruelty and Masculinity Theme

The Relationship Between Cruelty and Masculinity Theme 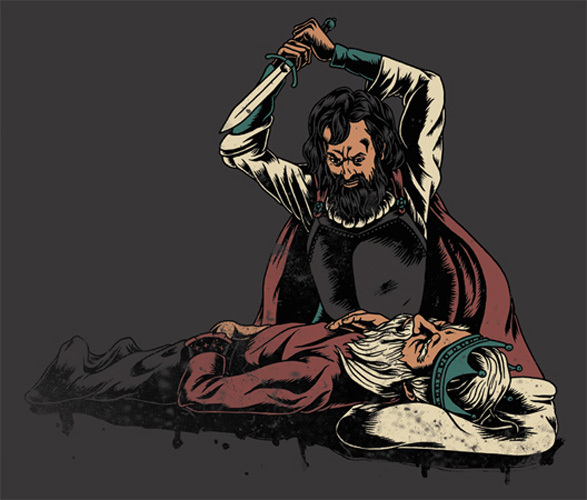 The Relationship Between Cruelty and Masculinity

Characters in Macbeth frequently dwell on issues of gender. Lady Macbeth manipulates her husband by questioning his manhood, wishes that she herself could be "unsexed," and does not contradict Macbeth when he says that a woman like her should give birth only to boys. In the same manner that Lady Macbeth goads her husband on to murder, Macbeth provokes the murderers he hires to kill Banquo by questioning their manhood. Such acts show that both Macbeth and Lady Macbeth equate masculinity with naked aggression, and whenever they converse about manhood, violence soon follows. Their understanding of manhood allows the political order depicted in the play to descend into chaos.

At the same time, however, the audience cannot help noticing that women are also sources of violence and evil.

The witches' prophecies spark Macbeth's ambitions and then encourage his violent behavior; Lady Macbeth provides the brains and the will behind her husband's plotting; and the only divine being to appear is Hecate, the goddess of witchcraft.

Arguably, Macbeth traces the root of chaos and evil to women, which has led some critics to argue that this is Shakespeare's most misogynistic play.

While the male characters are just as violent and prone to evil as the women, the aggression of the female characters is more striking because it goes against prevailing expectations of how women ought to behave.

Lady Macbeth's behavior certainly shows that women can be as ambitious and cruel as men.

Whether because of the constraints of her society or because she is not fearless enough to kill, Lady Macbeth relies on deception and manipulation rather than violence to achieve her ends. Ultimately, the play does put forth a revised and less destructive definition of manhood. In the scene where Macduff learns of the murders of his wife and child, Malcolm consoles him by encouraging him to take the news in "manly" fashion, by seeking revenge upon Macbeth. Macduff shows the young heir apparent that he has a mistaken understanding of masculinity.

At the end of the play, Siward receives news of his son's death rather complacently. Malcolm responds: "He's worth more sorrow [than you have expressed] / And that I'll spend for him" (5.11.16 - 17). Malcolm's comment shows that he has learned the lesson Macduff gave him on the sentient nature of true masculinity. It also suggests that, with Malcolm's coronation, order will be restored to the Kingdom of Scotland.