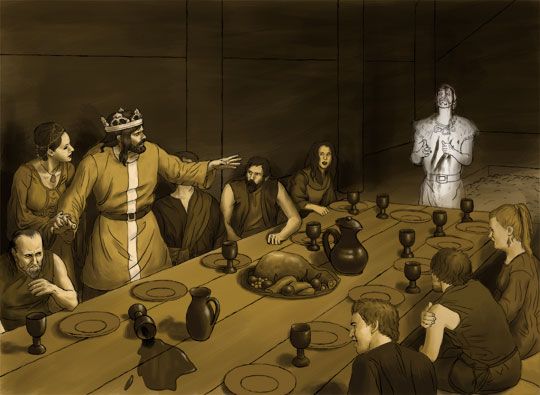 If the witches' prophecy is understood to be imposing a supernatural order on the natural order of things, the natural order can also be understood as responding with tempestuous signs. Following Duncan's death, Lennox describes the "unruly" night in some detail. Similarly, Ross notes that "the heavens, as troubled with man's act, / Threatens his bloody stage" (II iv 5-6). In the same scene, the Old Man and Ross both agree that they saw horses eat each other.

Even the events leading to the conclusion of the play can be understood as a negotiation of the natural and supernatural.

Whereas Macbeth believes that he will live the "lease of nature" - since Birnam Wood cannot possible come to Dunsinane Hill - the forest is literally uprooted by the English army in accordance with the prophecy. The dichotomy between the natural and the supernatural forms a backdrop that suggests the epic proportions of the struggle over the Scottish crown.