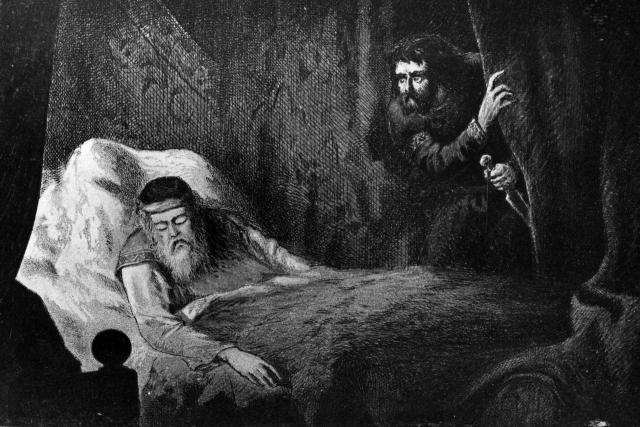 The Corrupting Power of Unchecked Ambition

The main theme of Macbeth - the destruction wrought when ambition goes unchecked by moral constraints - finds its most powerful expression in the play's two main characters.

Macbeth is a courageous Scottish general who is not naturally inclined to commit evil deeds, yet he deeply desires power and advancement.

He kills Duncan against his better judgment and afterward stews in guilt and paranoia. Toward the end of the play he descends into a kind of frantic, boastful madness.

Lady Macbeth, on the other hand, pursues her goals with greater determination, yet she is less capable of withstanding the repercussions of her immoral acts.

One of Shakespeare's most forcefully drawn female characters, she spurs her husband mercilessly to kill Duncan and urges him to be strong in the murder's aftermath, but she is eventually driven to distraction by the effect of Macbeth's repeated bloodshed on her conscience. In each case, ambition - helped, of course, by the malign prophecies of the witches - is what drives the couple to ever more terrible atrocities. The problem, the play suggests, is that once one decides to use violence to further one's quest for power, it is difficult to stop. There are always potential threats to the throne - Banquo, Fleance, Macduff - and it is always tempting to use violent means to dispose of them.