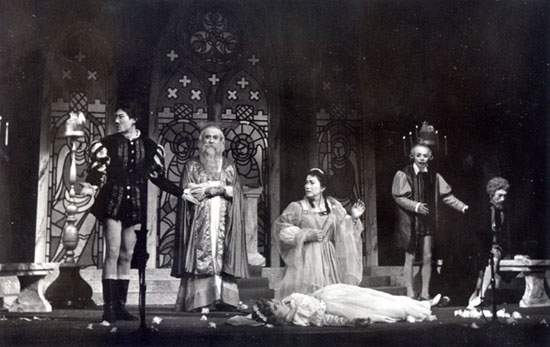 Much Ado About Nothing dwells on the way that language and communication affect our perception of reality. It is important to remember nothing (besides marriage) actually happens in the play—there are no fights, deaths, thefts, journeys, trials, illnesses, sexual encounters, losses or gains of wealth, or anything else material. All that changes is the perception that these things have happened, or that they will happen: that Hero is no longer a virgin, or that she has died, or that Claudio and Benedick will fight.

Tricks of language alone repeatedly change the entire situation of the play. Overheard conversations cause Benedick and Beatrice to fall in love, and the sonnets they have written one another stop them from separating once the prank behind their romance has been revealed.

The idea that we live in a world of language and appearances, beyond which we cannot see, is common throughout Shakespeare. The famous quote that “All the world’s a stage,” is another example.

By the end, the false language in Much Ado About Nothing has almost overwhelmed the reality. Characters have fallen into the roles given to them in the lies told about them: Benedick and Beatrice have become lovers, and Hero is treated like a whore by her own father. Ironically, the only character with the knowledge to replace this false language with the truth is the completely inarticulate Dogberry.