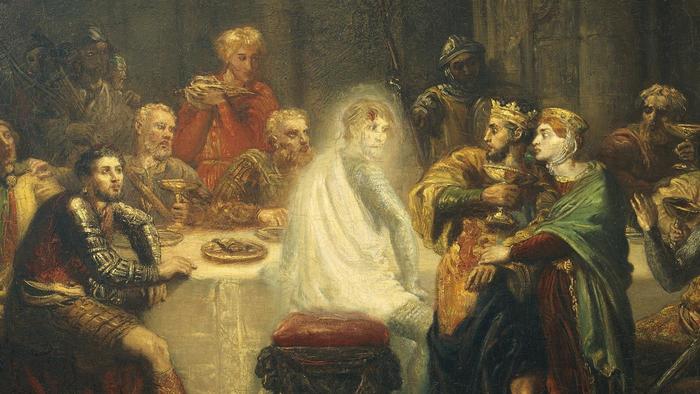 Visions and hallucinations recur throughout the play and serve as reminders of Macbeth and Lady Macbeth's joint culpability for the growing body count. When he is about to kill Duncan, Macbeth sees a dagger floating in the air. Covered with blood and pointed toward the king's chamber, the dagger represents the bloody course on which Macbeth is about to embark.

Later, he sees Banquo's ghost sitting in a chair at a feast, pricking his conscience by mutely reminding him that he murdered his former friend.

The seemingly hardheaded Lady Macbeth also eventually gives way to visions, as she sleepwalks and believes that her hands are stained with blood that cannot be washed away by any amount of water. In each case, it is ambiguous whether the vision is real or purely hallucinatory; but, in both cases, the Macbeths read them uniformly as supernatural signs of their guilt.